Bogus Basin – another new mountain to race.  First day’s racing delayed over an hour due to a load of fresh snow and variable visibility – not great conditions for a super g.  The rest of the series continued with similar weather.   Unfortunately I was not performing to my ability and making mistakes in one or both runs.  This was frustrating as I still made 3 top 10 finishes.  On my final day of giant slalom I managed to burn a hole in my gs suit when I hooked a gate panel across my chest.

Mark Engel, coach Guenther and myself flew from Boise to Seattle where we then drove up to Whistler ready to start the NorAm finals the following day on the 15th March.

Another new mountain never skied before and  not the greatest weather – wet, wet, and  snow – rain/lots of really soft snow/major fog.  The super g and combined were pushed back to the end of the series so we started with giant slalom in snowy and foggy conditions.  Tough conditions and for most of these races I am way back in the 60’s start.  For the slalom, the sun came out briefly and softened the snow even further so there were some great holes to bounce around in.  Saturday was another difficult day on the slopes as snow started falling early in the morning and did not stop until late in the afternoon for the super G (1st day) but the second day of Super G/Combined was a little better.   I scored  my best points in the Super G (53.07) unfortunately crashed in the slalom so didn’t get a super combined result.

It’s been a great experience,  a grueling six days of racing with difficult weather conditions and top competition, so it will be good to get back to Truckee with another 100 inches or 2.5metres of snow in the past week! 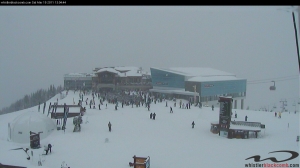