August has been a busy month with races full of high calibre athletes from all over the world.  From 17th – 20th August was the Japanese FIS Race Series at Coronet Peak and because the Winter Games/ANC races followed this, there was a larger than usual field of top athletes competing.  Being a Continental Cup, the Winter Games/ANC races on 22nd & 24th August followed Cup rules with only the top 60 qualifying for the 2nd run and this looked like a tough ask with the first 60 athletes under 20 points and not until bib 80 getting into the 30 point athletes in the slalom race!  I started in bib position 74 in the giant slalom in a field of 102 and managed to drop to start 48 for the 2nd run, ending up 39th overall, almost making points – definitely a legitimate point result of 35.71.   Started bib 89 in the slalom field of 108 athletes and managed to finish 29th.  Felt a lot more comfortable on the icy pitch of Race Arena at Rocky Gully than the previous race on Out Wide a few days earlier.  Unfortunately after the end of these races I picked up a nasty flu virus which knocked me flat  for a few days and took time for energy to return.

The final races at Coronet Peak were the National Championships 2nd and 3rd September.  Again it was a stacked field of top athletes and I had bib 45 in GS and 50 in slalom.  Managed to come in as second Kiwi in the giant slalom with Jon Olsson the winner.  In the slalom I missed the flip by splits and then tried to go all out but went from bad to worse so a pretty disappointing finish.  At the end of the Nationals I picked up National Junior Champion for giant slalom and 2nd in the open section, plus 2nd Junior in Slalom.  Next it is off to Mt Hutt for the last races of the New Zealand season with the ANC Finals. 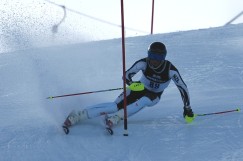 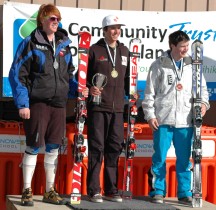