The NorAm slaloms at Loveland (26, 27 Nov) were thick with World Cup regulars and the extensive competitive field along with the snow conditions provided an extra challenge and lots of DNF’s.  The first NorAm giant slalom at Aspen – 22 out of the top 40 men in the world on the start line! Kind of a tough one!!!  With the line up of racers at these Norams, it was more like a World Cup (and the GS course was the Women’s World Cup course the day before!)  I managed to finish 48 in the first slalom and 53 in the giant slalom but had a DNF and a DNQ for the other two. 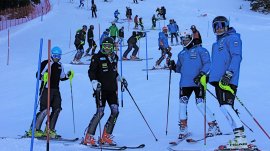 After the NorAm’s it was back to Silverthorne.    Got a day off to watch the “Birds of Prey” WC Downhill which Bode Miller won at Beaver Creek – great atmosphere.  Then it was  two days of Super G and 2 days of GS races at Copper Mountain which were pretty exhausting at such high altitude.  After this series of races it was the long drive (1,600 kms)  back to Truckee where it will be great to have a short break and a little more training before we head back out to Colorado for four days of slalom racing at Steamboat Springs.