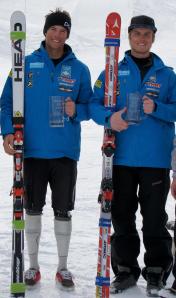 After the Snow King series,  it was off to Winter Park for a packed few days with mixed results at the Surefoot series. Snow postponed day two of GS so had half day off but then it was two slalom races on the one day at Breckenridge.  The following day was the postponed GS race and then this was followed immediately by another GS and SL race for the University of Denver – very tiring as no time off with six days of races straight after 4 days at Snow King.  I picked up a bronze for the under 20’s in Surefoot slalom at Breckenridge.  I was also third junior for the Uni slalom.  As soon as races finished we started the very long drive (1,600km) back to Truckee for a couple of days rest which went way to quickly.  As the first lot of snow in a couple of months at Sugar Bowl started, we packed up once again and drove to Park City-Utah, also snowing  (incredible lack of snow this season),  for a couple of days training before the Western FIS Tech series at Snowbird and Park City 26th – 29th January.  I had good first runs in the slaloms at Snowbird but challenging conditions 2nd run.  Day one I had a ten minute hold in the start gate in sleet while they removed stones and moved some powder around.  Giant slalom at Park city went a little better – second junior day one and taking out top junior day two receiving a very large mug.  Packing again to head on to Vail where will get in some training before the next NorAm races, 4th – 10th February.