Racing is now well under way with the Cardrona FIS Series and Coronet Peak National Champs completed.  Bit of a mixed bag with weather and snow conditions making for some tough and long days.  One and a half giant slalom races before blizzard conditions cancelled the second day of racing at Cardrona. Bit frustrating as day one with errors of the flats in soft snow cost too much time for me, but day two produced a good run before gale force winds closed lifts.  Had a 45 minute wait at the bottom of Valley View waiting for bus ride back to base buildings and more waiting before race called off some time later from continued winds and fresh snow.

Racing at Coronet Peak was also a mixed bag of results and snow conditions.  Too much warm and wet weather saw one of the slalom race days cancelled and tricky conditions for the remainder.  I was a bit frustrated with my giant slalom being a bit slow in the National Champs – congratulations to team mate Willis Feasey for taking out the title again.  Day two with a good clean fast run but a mistake at the bottom second to last gate cost me a DQ which was disappointing. 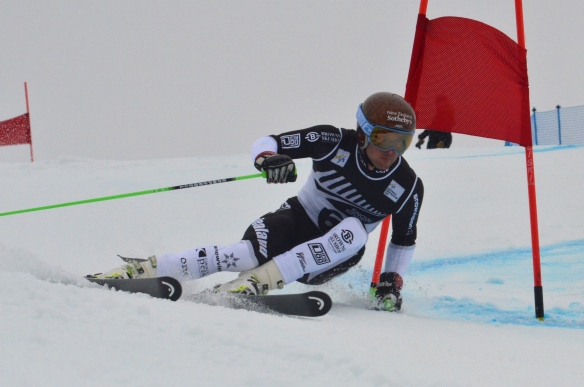 First day of slalom was cancelled after a night of heavy rain but we were lucky the following night with conditions freezing allowing the National Champs slalom race to go ahead.  I was frustrated after the first run with mistakes and no timing board but put a strong second run down.  I retained the National Slalom title and managed to score my best result in a slalom race (14.08).  Placed 5th overall with just 0.28 sec off the winner . 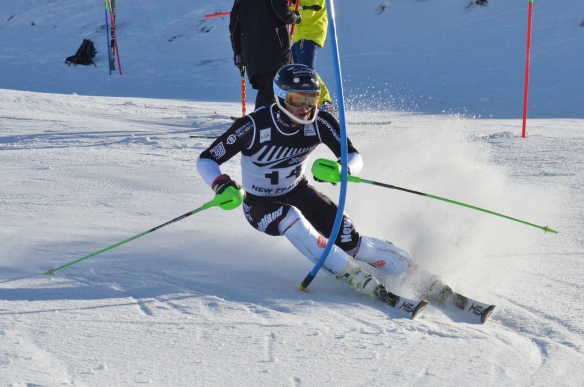 A little time now for some more training before we head over to Australia for the first of the ANC series which run 21st – 25th August.

Many thanks again to all the volunteers, Coronet Peak and Race Department, coaches, athletes, parents and all the amazing sponsors and supporters for all your time and contributions to my sport!