As we near the finish of our New Zealand season, the snow depth has once again been replenished although this has made for some interesting spring conditions for training!

Following on from the National Championship races at Coronet mid August, we headed over to Australia for the first of the ANC cup races at Mt Hotham.  Blizzard conditions meant day 1 was cancelled and with almost two metres of snow on piste, the conditions were really soft and and I found it quite difficult getting decent turns. While not the results I was aiming for, I did get some of my best results in Hotham. With needing to use the weather day it meant that it was a rush trip from Hotham back to Queenstown and straight into racing the following day for the NZ portion of the ANC series.  Bit of a mixed bag of skiing with some great sections of racing but the snow was quite soft and slushy in parts which broke away.  Not quite enough training to get the full feel for my new equipment yet, but really enjoying the new Volkl, Dalbello and Marker set-up so far with just a few adjustments to make.

A couple of days off snow then it was off to Methven for racing at Mt Hutt with blizzard conditions for the start of what was to be the Super G races.  This meant that the first two days were cancelled and we had three super g races on day three, 5th September.  Soft conditions made for some frustrating results but I came away with 2nd in National Champs SG with team mate Willis taking out 1st place.  This also rounded out my ANC cup results to win the overall yellow bib. 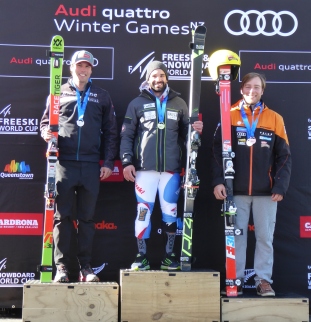 Final races for the season were on the 7th September at Cardrona where we had two giant slalom races on the one day and I picked up two silver medals.The more gentle slope and soft snow are unforgiving with any mistakes and a good line is important.

Walk up Wye Creek with Kelsie